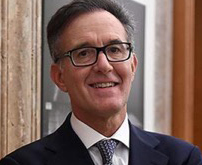 Paolo Magri is Executive Vice President and Director of the Institute for International Political Studies (ISPI) and Professor of International Relations at Bocconi University. He is also Secretary of the Italian Group of the Trilateral Commission and Member of the Europe Policy Group of the World Economic Forum, of the Strategic Committee of the Minister of Foreign Affairs and International Cooperation, of the Board of Directors of the Italy-China Foundation and of the Advisory Board of Assolombarda.

A public journalist, he is a regular guest as a commentator on global issues, American foreign policy, Iran and the Middle East. Previously, he was an official at the United Nations Secretariat in New York and, until 2005, he was Director of International Relations at Bocconi University in Milan. He has been a consultant for various international organizations and companies such as the Italian Ministry of Foreign Affairs (Albania), the European Union (Poland) and Italcementi (Egypt).