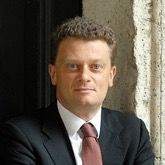 After studying at the University of Turin and specializing at the London School of Economics, he worked as a researcher at the National Bureau of Economic Research (NBER). He was chief economist of FIAT and Telecom Italia and worked for the Bank of Italy's Research Department. Since 2008 he has been the director of the Agnelli Foundation which, under his guidance, has launched a research program on the topic of education, in the public sphere (with the publisher Laterza) that reports on the school system in Italy and provide suggestions on the actions to be taken.

Since 2010 he has been a member of the International Scientific Technical Committee of the MIUR for the elaboration of the strategic lines related to the construction of a national system for evaluating schools. He is a member of the Cultural Commission of Confindustria and a director of Censis and also Prometeia, an association for econometric forecasts and of the School of Higher Education for Management of Turin. He has carried out research in the field of macroeconomic studies and labour economics, collaborating with leading universities and research institutes in Europe and the United States. As well as numerous press articles, he is the author of scientific publications on the subjects of education, the economy of labour, the industrial economy and communications regulation.